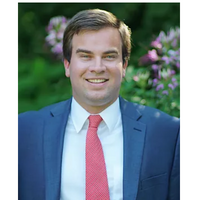 Kevin brings a wealth of extensive legislative and executive experience from his previous staff positions on Capitol Hill, in the North Carolina General Assembly, at the North Carolina Department of Public Instruction (NCDPI), and most recently at UNC Pembroke. In these roles, Kevin worked extensively in key policy areas including but not limited to financial services, foreign affairs, healthcare, and education.

Kevin left NCDPI to serve as the Executive Director of Government Affairs at UNC Pembroke. Kevin led the legislative outreach for the university on the state and federal levels and also worked directly with the Chancellor on other projects to help strengthen the university and community. In this capacity, he helped build broader advocacy efforts to generate additional support for the university among key stakeholders across the country and at the grassroots level across the state.

When he isn’t roaming the halls of the General Assembly, Kevin can be found with his wife Megan and their two dogs Boone and Carter. If you can’t find him in Raleigh, head east or west and you may find him in a duck blind or trout stream.